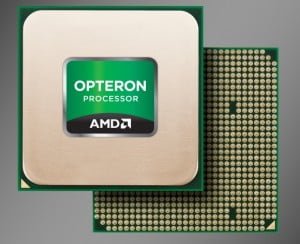 Since the launch of its new core server architecture, and AMD Opteron 4200 and 6200 Series processors last November, AMD unveiled a disruptive server strategy and intentions to leverage its leading graphics IP while driving down the power in future SoC offerings. As part of accelerating this, AMD recently announced it had entered into a definitive agreement to acquire Cloud pioneer SeaMicro.

Today AMD has delivered on its promise of a low-power, single-socket solution that brings server functionality with desktop economics. The AMD Opteron 3000 Series platform is targeted to the dense, power efficient 1P Web hosting/Web server market. Available in either 4- or 8-core CPUs, the AMD Opteron 3200 Series processor is shipping today in platforms from MSI, Tyan, Fujitsu and Dell. Based on the “Bulldozer” core, the AMD Opteron 3000 Series platform leverages Socket AM3+ and provides customers with the cost savings associated with a “desktop-like” infrastructure, yet still offers server-class reliability, enterprise-class silicon validation/testing, security features and server OS certification.

“AMD is a great partner, and we’re excited about the new AMD Opteron 3200 Series CPU.  It allows us to create a custom design for our DCS customers, and deliver a compelling combination of performance and energy efficiency, “ says Dell Data Center Solutions’ Steve Cumings. “As the leader in the Density-Optimized market segment, we require focused partner technology within industry standards – and this is a good fit for our customers.”